As Abu Dhabi Ocean Racing – the emirate’s Volvo Ocean Race contesting team – prepare for Leg 3 of the round-the-world epic starting just off the UAE capital on Jan 3 for the race to Sanya in China – the squad which took Leg 1 and Cape Town’s inport race honours look back on a heady 2014.

ADOR’s 2014 campaign produced many memorable moments and fortunately for the team, led by double Olympic silver medallist Ian Walker and featuring Emirati Olympian Adil Khalid, most of them were high points. It was a year of hard work and dedication from everyone involved –the sailors and the shore team which backs them up.


The team came together for the first time for a two-day orientation session at the Royal Southern Yacht Club in Hamble, UK. Skipper Ian Walker, general manager Phil Allen and commercial director Jamie Boag presented their plan to win the Volvo Ocean Race for Abu Dhabi.


ADOR’s brand new Volvo Ocean 65 racing yacht Azzam came out of the boatshed at Green Marine in Southampton for the first time. Just days later, her towering carbon mast was carefully stepped and Azzam was taken by barge to Williams Shipping where she was launched before breezing through mandatory safety tests and sailing for the first time on March 6.

Four days later Walker’s crew set off on their first offshore passage – a 1000-mile delivery and shakedown sail to the ADOR training base in Cascais, Portugal.


ADOR ramped up the training schedule, switching from single-day coastal runs to multi-day offshore sessions as the crew continued to gather valuable performance data and learn how to get the most out of Azzam.


Training sessions continued apace and ADOR took a little time out to meet Cascais Mayor Carlos Carreiras who formally welcomed the team to his city and pledged his community’s support for the Abu Dhabi campaign.


ADOR set off on their longest training run to date – a 10-day transatlantic crossing to Newport, Rhode Island. As Azzam approached the US east coast the crew were ‘buzzed’ by the Cunard Line flagship RMS Queen Mary II as the ship’s captain altered course en route to New York to give Azzam a three-blast salute on the QMII’s whistle. A video of the unique encounter has since been viewed more than 39,000 times.


After a quick turnaround by the ADOR shore crew, Azzam set off back across the Atlantic on a fast downwind ride to Cowes in the UK where she was to be the star guest at the world’s most famous regatta – Aberdeen Asset Management Cowes Week.

August - Adil Khalid proudly hoisted the UAE flag to the top of Azzam’s mast during a ceremony at Cowes Week to mark ADOR’s entry into the Volvo Ocean Race. Later British musician Simon Le Bon and winner of the ‘One4Azzam’ Facebook competition, American Paralympian Keith Burhans, joined the ADOR crew and helped them sail to victory in their first competitive outing - the Artemis Challenge, a charity pro-am race around the Isle of Wight.

A week later, as Hurricane Bertha pummelled the UK, ADOR smashed the monohull record in a wild and windy Sevenstar Round Britain & Ireland Race, finishing the 1400-mile course in four days, 13 hours, 10 minutes, 28 seconds – that’s over 30 hours quicker than the previous record and a new official world record for a lap of the British Isles.

September – Unbeaten in her first two races and with more than 18,000 miles of ocean training miles under her keel, Azzam arrived safely in Alicante, Spain – the Volvo Ocean Race HQ for the start of the 2014-15 race.

October – The seven boat race fleet lined up for the Alicante In-Port Race and ADOR finished a narrow second after a thrilling battle with Turkish entry Team Alvimedica.


A week later, Azzam led the pack at the Alicante leaving marker as the fleet set off on Leg 1 bound for Cape Town, South Africa 6,487 nautical miles away.

November – After more than three weeks at sea ADOR skipper Ian Walker allowed himself a satisfied fist-pump as he steered Azzam across the Leg 1 finish line in first place. The narrow victory – just 12 minutes over China’s Team Dongfeng – was all the sweeter as it took place on the three-year anniversary of ADOR breaking its mast on the opening night of the 2011-12 Volvo Ocean Race.

Walker’s men followed up the Leg 1 victory with a win in a flukey Cape Town In-Port Race in the shadow of Table Mountain.


There was little time for the crew to rest on their laurels as just four days later the fleet blasted out of Cape Town in 40-knot winds at the start of Leg 2 to Abu Dhabi. Despite having to fix a torn gennaker sail and repair damage to Azzam’s steering system in the first week, once into the Indian Ocean ADOR work their way to the front and led the fleet across the equator into the Northern Hemisphere.

December – On the afternoon of their 24th day at sea, and after a predominantly sweltering hot leg during which the ADOR sailors’ chocolate treats all melted and they almost ran out of toothpaste, Emirati Olympic sailor Adil Khalid took the helm of the Abu Dhabi VO65 yacht to steer her home in third place. 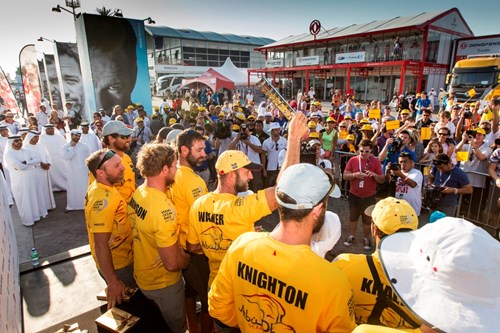 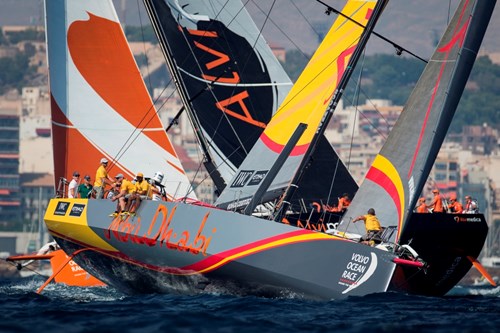 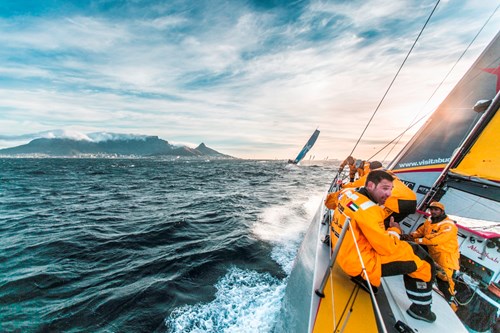