Abu Dhabi, UAE – 19th November 2014 - Abu Dhabi Ocean Racing (ADOR), the emirate’s entry into the Volvo Ocean Race 2014–15, cast off on the next leg of the epic, round-the-world race on Wednesday evening hoping to complete a hat-trick of victories in the best place possible – the team’s home port of Abu Dhabi.

Leaving Cape Town, South Africa behind, the scene of back-to-back triumphs for ADOR on Leg 1 and the In-Port Race, the eight-man crew, led by double Olympic medallist Ian Walker, was cheered off the dock by fans as its yacht Azzam set off on the 6,125-nautical mile second leg toward the UAE capital finish  line

Despite topping the in-port series and overall leaderboards, Walker said he would be taking nothing for granted on Leg 2, which takes the fleet of seven Volvo 65 yachts through the Indian Ocean to the emirate and is expected to take around 25 days to complete.

“We’re off to a good start, but now we have a tricky ocean leg to deal with,” Walker said. “Of course, we’d love to be first into our home port for all our fans in the UAE, but we have to try to put that to the back of our minds and do what we normally do. I think we have the right approach: we know we have strong crew work; our speed is OK - so we can afford to be conservative strategically.”

On the way to Abu Dhabi, Azzam – the Arabic for determination - will pass the Cape of Good Hope as it first heads south in search of a windy South Atlantic storm system to whisk it east, before it turns north through the Indian Ocean and crosses the Equator towards the Straits of Hormuz.

“It’s going to be a leg for staying patient and trusting in your own ability,” said ADOR’s UAE helmsman and trimmer Adil Khalid, the only Arab to contend this race and complete the last, who’s looking forward to welcoming his crewmates to the Emirates again. “On Leg 1 we got through the Doldrums pretty smoothly. In the Indian Ocean you have to negotiate a double-Doldrums so it’s twice as tricky – just when you think you are out, the second one catches you. It could be a nerve-wracking leg.”

For leg starts, teams are allowed to carry a celebrity guest for the inshore section, who then gets to jump from the yacht shortly after the final marker. ADOR’s celebrity jumper was South African Rugby superstar Francois Pienaar who historically captained the Springboks to victory against New Zealand in the 1995 World Cup.

The tournament was the first major sporting event to take place in South Africa following the abolishment of apartheid and the subject of the 2009 film Invictus in which Pienaar was played by Matt Damon.

Having watched closely as Walker and his crew powered Azzam around the confined inshore course to round the final leaving marker, Pienaar bravely stepped off Azzam’s stern into the chilly South Atlantic, from where he was quickly picked up by the ADOR support crew.

ADOR fans can follow the team’s progress via the tracker on the official race website at volvooceanrace.com. 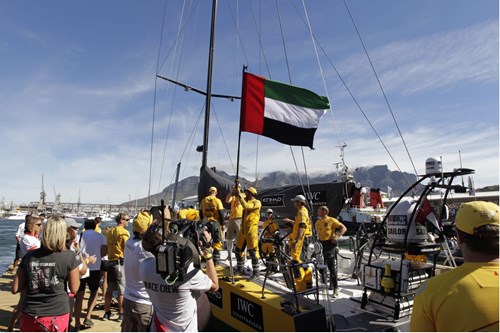 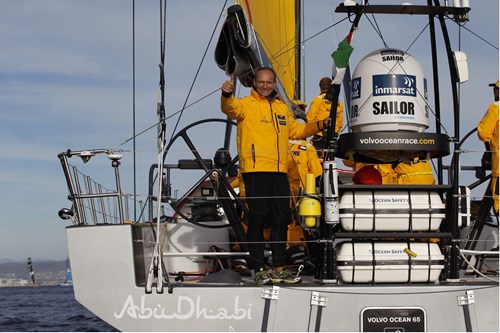 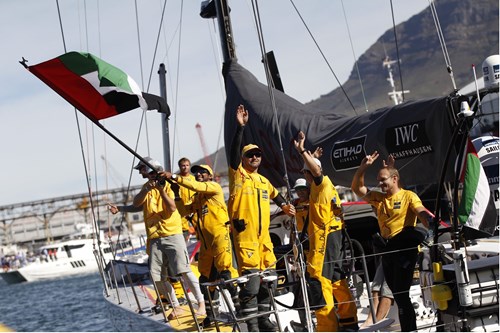